Virus Cases Are Rising Again In China. Will This Affect Closeouts In The U.S.? 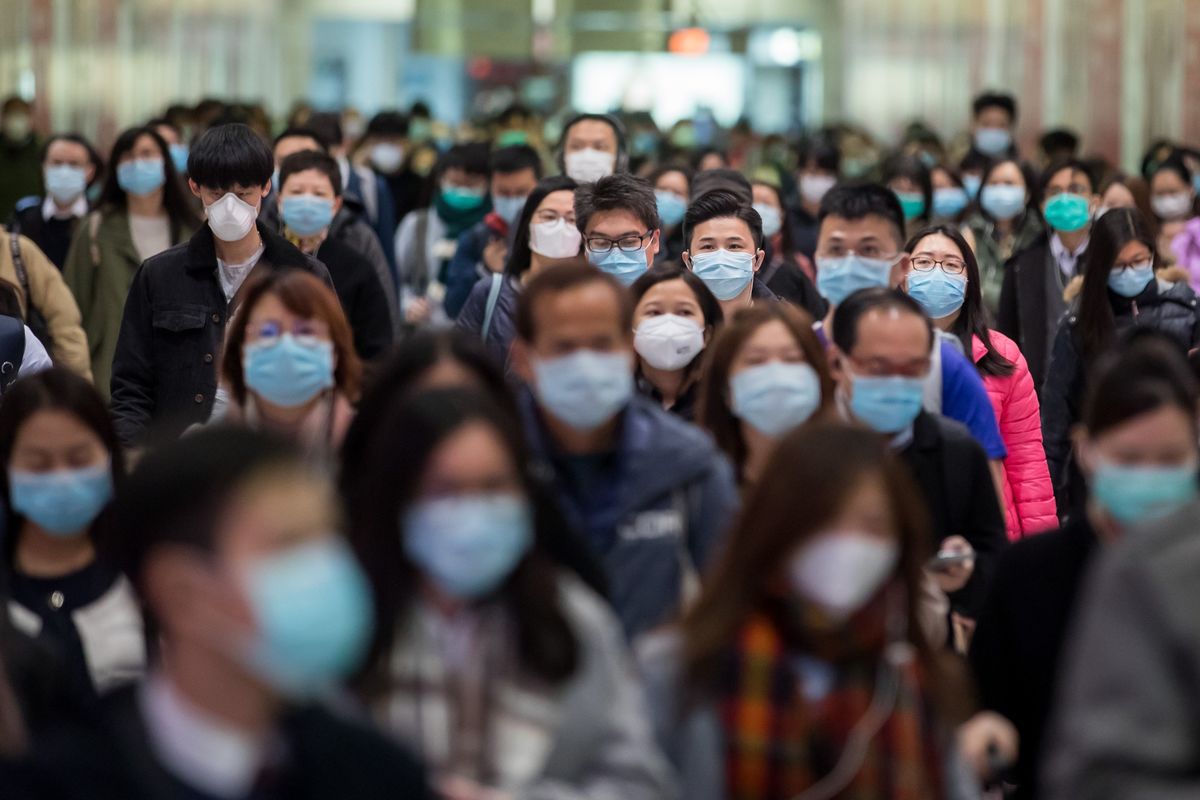 Several Chinese cities began cutting routine community COVID-19 testing on Monday, days after China announced an easing of some of its heavy-handed coronavirus measures, sparking worry in some communities as nationwide cases continued to rise. Hopefully, this won’t lead to shutting down factories like it did 2 years ago during the height of the pandemic. With no new goods coming into the U.S., it would directly affect the volume of closeouts and overstock inventory for sale. Liquidation stock is a function of how much dead stock and overstock is sitting in 3PL warehouses around the country. There is no demand for importers to sell bulk inventory and liquidation products if little or no new goods are coming

In the northern city of Shijiazhuang, some families expressed concern about exposing their children to the virus at school, giving excuses such as toothaches or earaches for their children's absence, according to social media posts following a state media report that testing in the city would end. You may recall the last time Chinese factories closed for Covid, there was an immediate slowdown in sales as there were no workers to make products. Shipping lines were backed up and no new goods were coming into the U.S. because vessels loaded with containers were sitting on the ocean with no capacity to unload surplus goods, discontinued merchandise or other liquidation inventory. Any companies that were selling closeouts and overstock inventory suddenly became very popular because it was the fastest way to get inexpensive liquidation stock to retail stores desperately in need of goods.

Other cities, including Yanji in the northeast and Hefei in the east, also said they will stop routine community COVID testing, according to official notices, halting a practice that has become a major fiscal burden for communities across China. Companies that buy and sell bulk inventory may see a positive trend from China’s new ease in restrictions. As virus cases have continued trending lower in the United States, more and more people are out spending money in retail stores and buying up excess inventory and closeouts. Major U.S. retailers are doing better now than they did during 2020 when customers were visiting closeout websites and liquidation wholesalers where they could buy online. Companies that sell bulk inventory on closeout websites have been forced to adjust as the consumer is now back out spending, visiting stores, restaurants and brick and mortar shops.

On Friday, the National Health Commission updated its COVID rules in the most significant easing of curbs yet, describing the changes as an "optimization" of its measures to soften the impact on people's lives, even as China sticks to its zero-COVID policy nearly three years into the pandemic. This is good news for companies in the United States that rely on imports because it is trending back to “business as usual” If you are shutting down a 3Pl warehouse or closing your business, you may want to consider contacting a company that only buys overstock inventory and closeouts. These are professional surplus inventory buyers that can help you through both the closeout process and liquidation process of clearing liquidation stock by having a liquidation sale.

The move, which cut quarantine times for close contacts of cases and inbound travelers by two days, to eight days total, was applauded by investors, even though many experts don't expect China to begin significant easing until March or April at the earliest. The changes come even as several major cities including Beijing logged record infections on Monday, posing a challenge for authorities scrambling to quell outbreaks quickly while trying to minimize the impact on people's lives and the economy. Some areas of Beijing are requiring daily tests. The concern and confusion in Shijiazhuang was a top-five trending topic on the Twitter-like Weibo. If you are considering clearing overstock from you warehouse by contacting liquidation companies, you can try a simple Google search and use terms like sell bulk inventory, getting rid of old stock, shutting down operations, sent too much inventory to Amazon, closing down Amazon, downsizing at end of the year, or excess inventory new products coming into warehouse.

The city's Communist Party chief, Zhang Chaochao, said its "optimization" of prevention measures should not be seen as authorities "lying flat" - an expression for inaction - nor is Shijiazhuang moving towards "full liberation" from COVID curbs. Covid changed the way businesses operate, and caused brick and mortar companies to open closeout websites, Amazon FBA seller accounts and other sources for sourcing excess inventory from closeout brokers, closeout distributors and other ways for liquidating excess inventory.

Nationwide, new locally transmitted infections climbed to 7,475 on Nov. 7, according to China's health authority, up from 5,496 the day before and the highest since May 1. Guangzhou accounted for nearly a third of the new infections. The increase was modest by global standards but significant for China, where outbreaks are to be quickly tackled when they surface under its zero-COVID policy. Economically vital cities, including the capital Beijing, are demanding more PCR tests for residents and locking down neighborhoods and even districts in some cases. The sharp rebound will test China's ability to keep its COVID measures surgical and targeted, and could dampen investors' hopes that the world's second-largest economy could ease curbs and restrictions soon.

We are seeing a game between rising voices for loosening controls and rapid spreading of COVID cases," said Nie Wen, a Shanghai-based economist at Hwabao Trust. Considering how the nationwide COVID curbs are crushing domestic consumption, Nie said he had downgraded his fourth-quarter economic growth forecast to around 3.5% from 4%-4.5%. Of course, an increase in liquidation inventory may change these numbers and if large National retailers continue liquidating inventory from their distribution centers, this will also affect the number of closeouts and surplus inventory being unloaded into the market. The economy grew 3.9% in July-September. The rising case load dragged on China's stock markets on Tuesday, but shares have not yet surrendered last week's big gains.

Investors see China's beaten-down markets as an attractive prospect as a global slowdown loom, and have focused on small clues of gradual change - such as more targeted lockdowns and progress on vaccination rates. "No matter how harsh the letter of the law is...there is a little bit more loosening," said Damien Boey, chief macro strategist at Australian investment bank Barrenjoey. Guangzhou, capital of Guangdong province, reported 2,377 new local cases for Nov. 7, up from 1,971 the previous day. If we enter a global recession, as many economists fear, the market for closeouts, liquidation stock and excess inventory will open up to new consumers who are price sensitive to rising costs and increased inflation. The closeout merchandise or overstock inventory business model always does better during economic hard times. As consumers turn to discount and off-price sellers offering deep discount, they are more interested in closeouts than regular imports, and they concentrate of opportunities to buy liquidation overstock, obsolete inventory and slow selling products.

It was a dramatic jump from double-digit increases two weeks ago. Surging case numbers in the sprawling southern city, dubbed the "factory floor of the world", means Guangzhou has surpassed the northern Inner Mongolia city of Hohhot to become China's COVID epicenter, in its most serious outbreak ever. Many of Guangzhou's districts, including central Haizhu, have imposed varying levels of curbs and lockdowns. But, so far, the city has not imposed a blanket lockdown like the one in Shanghai earlier this year. Shanghai, currently not facing a COVID resurgence, went into a lockdown in April and May after reporting several thousand new infections daily in the last week of March

We have been working from home for the past couple of days," said Aaron Xu, who runs a company in Guangzhou. “Only a few compounds have been locked up so far. Mostly we are seeing disruptions in the form of public transit services being suspended and compound security barring couriers and food delivery. And we have to do PCR tests every day." Consumers working from home also fueled the retail sales boom as they visiting online closeout sellers and closeout websites making buys on eBay, Instagram and Facebook marketplace where they were able to buy overstock wholesale merchandise, closeouts, excess inventory and discontinued products. Closeout buyers that were willing to invest time in looking for special deals save a lot of money on liquidation stock for sale and overstock toys, home goods and housewares.

Merchandise USA can help you sell dead stock, closeouts, overstock inventory and excess inventory. We buy and sell closeouts that would otherwise be collecting dust in your warehouse, and taking up space needed for new merchandise. Contact us today if you need a liquidation buyer to help you through the closeout process of how to clear stock from your warehouse. If you are shutting down operations we can buy your entire inventory, or if you are downsizing warehouses, we can offer liquidation services.